There is a robust accountability process for OCHRE to make sure that it develops as Aboriginal communities intended. 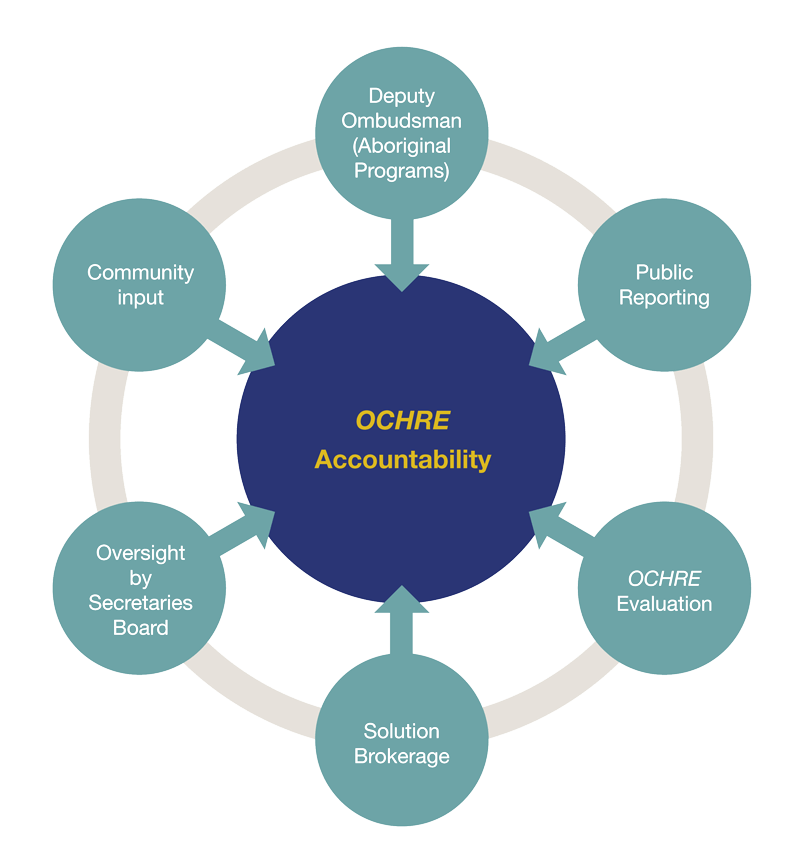 The Deputy Ombudsman (Aboriginal Programs) and his team monitor progress in the implementation and outcomes achieved across all the OCHRE initiatives and sites. They give feedback to OCHRE agencies and partners to enable them to address any issues raised early and to adopt good practices and to achieve the plan’s goals. They can also table public reports on OCHRE in Parliament.

As part of the Deputy Ombudsman’s monitoring and assessment, evaluations of individual OCHRE initiatives have been conducted by the Social Policy Research Centre at the University of New South Wales and the NSW Government’s Centre for Education Statistics and Evaluation. These independent evaluations – as well as other evidence – inform the accountability process.

The NSW Ombudsman’s office also has broader oversight of other government agencies and funded services, and can take up individual complaints about unfair treatment, lack of access to a service and other issues. Further information on how the NSW Ombudsman works with Aboriginal communities can be found here.

Before the development of OCHRE, the NSW Ombudsman and the NSW Auditor-General called for strengthened accountability and transparency in the design, delivery and monitoring of services for Aboriginal communities. Some Aboriginal people also told the Ministerial Taskforce that ‘[there is] a fundamental lack of accountability to how we allocate and spend Aboriginal monies’.

OCHRE initially proposed the creation of a Coordinator General for Aboriginal Affairs and a new and independent Aboriginal Council. After some additional consultation, Aboriginal community leaders suggested the appointment of an Aboriginal Ombudsman to monitor and assess specified initiatives and programs relating to Aboriginal Affairs. It was decided that a Deputy Ombudsman for Aboriginal Programs was a stronger model for a number of reasons including access to an existing structure and processes.

For more information about the Office of the NSW Ombudsman: www.ombo.nsw.gov.au

Public reporting: An annual report on the progress of implementation is tabled in Parliament. Download copies of the OCHRE annual reports.

Independent evaluation: Evaluation of the first three years of OCHRE was undertaken by the Social Policy Research Centre at the University of NSW. The Centre for Aboriginal Economic Policy and Research at the Australian National University is leading the evaluation of the second phase of OCHRE, focusing on Local Decision Making. Find out more information.

Solution Brokerage: Aboriginal Affairs NSW has a role in delivering whole-of-government solutions to local, regional and state-wide issues that affect Aboriginal people and communities. Under OCHRE, Aboriginal Affairs NSW can act as a solution broker across the NSW Government to improve coordination, resolve issues, reduce duplication and achieve the best possible outcomes. Find out more information.

Community input: OCHRE publicly commits the NSW Government to ensuring Aboriginal people are involved in the planning, design and evaluation of OCHRE.